Our story within a story takes place on Christmas Eve, 1945. 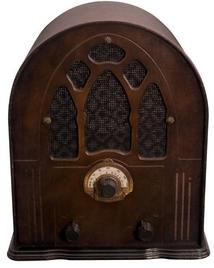 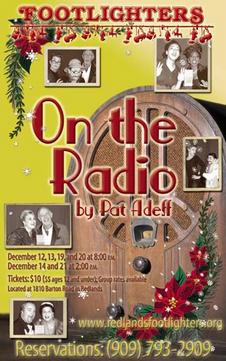 Mr. Grandview – a grand actor - able to do many various dialects,

Mrs. Grandview – a grand actress (able to do many various dialects)
(no one is more impressed than herself)
(Does voices for: Mrs. Green, Mrs. Olson)

Mrs. Billie Armstrong (“Mom” to everyone at the studio, she is also the stage mother for the children's chorus)
(Does voice for Grammy Sue)

Miss Lola Ketchum – gorgeous actress who has caught the eye of Mr. Grandview
(stunningly gorgeous with little girl voice)
(Does voice for Katie)

Margaret Gannon – Commercial Girl (sings and can do young girl voice)
(Does voice for Cindy)
(able to sing, dance and do little girl voice)

Anne Gannon – Commercial Girl (sings and can do young girl voice)
(Does voice for Mindy)
(able to sing, dance and do little girl voice)

Ralph Ferris​ - A working voice actor with an eye for the ladies.

Ralph Ferris, Jr. - Sound effects man and cute nerd - must be able to do several actions at once. He’s the radio station’s sound effects guy

(Does voice for Mrs. Johnson)

Childen's Chorus any number of children who audition and can sing are part of the Children's Chorus.

Radio Station Writer
Female 25 – 50.  Is on stage most of time at typewriter.  Hair in bun with pencils sticking out of it.  Harlequin style glasses.

Telegram Boy –
Male 12 - 17, he goes throughout the lobby before the show paging different people.  He is the one who gives Dorothy the telegram for Amanda.

Autograph Woman –
She also helps us set the ambiance for this production by being in the lobby before the show.  She will be one of the people who receive telegrams.  She also comes out of the audience to get autographs from our various singers and performers.